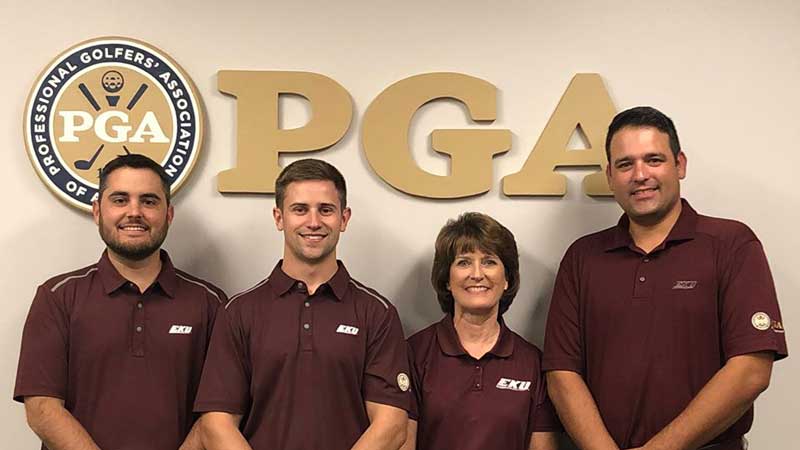 Kim Kincer, Director of PGA Golf Management at Eastern Kentucky University, has been at the operational heart of some significant endeavors for Kentucky golf. She was one of the original leaders of Kearney Hill Golf Links during its construction and opening days, laid the groundwork for the PGA Golf Management program at Eastern Kentucky University and for the last fourteen years has helped transform dozens of college students into successful PGA Member Professionals across the country.

Her journey in the game of golf did not begin right away. It took her until the summer after her eighth-grade year to start playing golf and it all had to do with her high school needing a body. Kincer’s best friend told her that the girls’ golf team needed another player and despite the fact she and her parents were not golfers, Kincer decided to give it a shot. She received lessons from a PGA Professional, and it did not take long for her to realize she loved the sport. It helped that the team had some talent, as they won their Regional in each of Kincer’s four years and advanced to the State Championship two out of the four years. Having a working role within golf would soon follow, as she took a part-time job at Tates Creek Golf Course where she worked in their pro shop. As a Lexington native, Kincer had an understandable interest in going to the University of Kentucky. She registered to attend UK knowing she would not receive an athletic scholarship. At the eleventh hour, however, Kincer was playing a golf tournament that University of Cincinnati coach Carol Johnson was attending. Johnson took an interest in Kincer and her golf game so she offered Kincer that coveted scholarship. It was an opportunity Kincer could not turn away from, especially considering Johnson’s impact in women’s golf.

After graduating with a Bachelor’s in Communication Arts with a concentration in Journalism, Kincer returned to Lexington and the city’s golf courses. Kincer was an Assistant Golf Professional at Lakeside Golf Course during the time dirt was being moved several miles up the road at Kearney Hill during its construction. Intrigued by the idea of being involved with a golf course operation from scratch, she went to her boss and asked to have a role within the facility’s operation as it got started. Her wish was granted, and before long she was the Interim Head Golf Professional at Kearney Hill before the facility had even opened for play. Her task-list was straightforward; get everything in place and ready to go by the time it was opening day. So, she had an active role in the hiring process, ordered numerous supplies for the clubhouse and golf course, marketed the facility and its grand opening, all while working out of a trailer since the clubhouse construction had not yet finished. She knew that she would not be at Kearney Hill for the long-term future but also knew the addition of a new golf course to the city’s package meant a shift in staff amongst the Lexington courses. Her hard work earned her a full-time Head Golf Professional position at Tates Creek Golf Course, the course where she began her golfing trail.

From 1990 until 1998, Kincer led the operation of Tates Creek until an opportunity opened that sparked her interest. A position opened at Methodist University in Fayetteville, North Carolina which Kincer would apply for and accept. She became the Head Women’s Golf Coach, leading the team to five consecutive NCAA Championship titles in five years of coaching. She also served as an Assistant Director to Methodist’s PGM program, where for eight years she had a more hands-on role to mentor and shape the minds and golf games of the students she worked with. It looked like she might be there for a while until another opportunity in Kentucky popped up.

“I was visiting my mom and dad in the summer of 2005,” Kincer relayed. “On the day I was going to leave and head back to North Carolina, my dad showed me an ad in the Lexington Herald Leader about Eastern Kentucky seeking someone to assist with the creation of a PGM program there.”

Four years earlier, Dr. Norb Elbert, who at the time was EKU’s Chair of Management, Marketing and Administrative Communication, read an article in the Wall Street Journal about PGA Golf Management and wanted to add the program to EKU. When it came time to hire the Director of PGA Golf Management in the mid-2000s, Kincer entered her name and was chosen to spearhead the program. That began the process of getting the program approved by the PGA of America, something that is not as easy as people probably believe. After completing a 700+ page document that went to PGA Headquarters, adjusting curriculum to meet the PGA’s standards and fine-tuning many other aspects of the program, EKU had become Kentucky’s first accredited PGM school by the PGA of America thanks to Kincer’s leadership.

In 2006, EKU PGM welcomed its first class with Kincer at the helm of the operation. It remains that way today, while two of her fellow staff members, PGA Member Professionals Tyler Caviness and Ross Lingenfelder have each been on board since 2009. Caviness and Lingenfelder were students of Kincer’s at Methodist University. Recently, the program added its fourth Professional with the addition of Austin Molen, who graduated from the EKU PGM program in 2016.

Molen is among the alumni from the program who have found a position they love in the golf industry following their graduation. Multiple graduates work at Winged Foot Golf Club, site of this year’s U.S. Open. Other alumni have ended up at other facilities that rank among Golf Digest’s Top 100, including Camargo Club, Congressional Country Club and Essex County Country Club, to name a few. Others have ended up in notable spots like PGA Headquarters or the Acushnet Company. Witnessing these successes is one of the things that makes Kincer proud of the work the program has done.

“Students who enter our program are going to grow in several different ways. From an academic standpoint, they’ll get a Bachelor in Business Administration from a AACSB accredited School of Business, something not all PGM schools offer. The business education they get along with the golf education can really set our students apart post-graduation. But the best thing about my job is to see students come in as freshmen and watch them graduate and then become colleagues with them afterwards. We see a total transformation in students’ knowledge of the business of golf. They all are well-versed with the game itself but it’s our job to help them learn about the business side of the industry. We open their eyes to the entire foundation of the golf business.”

The work experiences for students don’t just start when they leave EKU but rather immediately after their freshman year. Three months of internships following that school year plus their sophomore and junior years allow students the opportunity to utilize their teachings on the job while networking with surrounding Professionals. A final internship following their senior year that lasts seven months gives students one final chance to find their niche before entering a full-time job. Those internships are one of the most popular aspects of PGM for both the student body and Kincer herself.

“The internships give students the chance to showcase different skills and come back to us in the fall knowing something they never knew before they left. We’ve had students from small towns in Kentucky, Indiana, Ohio, and Illinois go across the country for one of these positions never having dreamt about leaving their comfort zone. It gives them confidence to grow not just as professionals but also on a personal level.”

Kincer says the program’s biggest goal is to obviously graduate students and help them transition into roles as PGA Member Professionals. Each summer, the program’s staff meets to discuss smaller goals that can be ever-changing. Whether that is the recruiting process, ideas to instill in the classroom, or workshops they can provide to teach students something they won’t learn in the classroom, Kincer and her team want to get students involved. The program offers a Student Association along with a Tournament Committee that allow students to take initiative within their program.

Personally, each of the staff members have their own individual goals as well to help better teach their students. Caviness, for instance, tends to make a trip to a USGA Rules of Golf School almost annually. Lingenfelder and Kincer both have made multiple trips to teaching and coaching summits through the years. Currently for Kincer, she is waiting to learn what the LPGA’s new Master Professional process will be. Once it is approved, Kincer will begin that process in hopes of adding LPGA Master Professional to her impressive resume. One simple quote from Kincer, however, paints the picture of everything a person would need to know before they begin working with her or before they send their son or daughter to her in Richmond to know she is the person for the job.

“I’ve loved every job I’ve ever had. I could work in any role of the golf industry and be as happy as I ever have.”