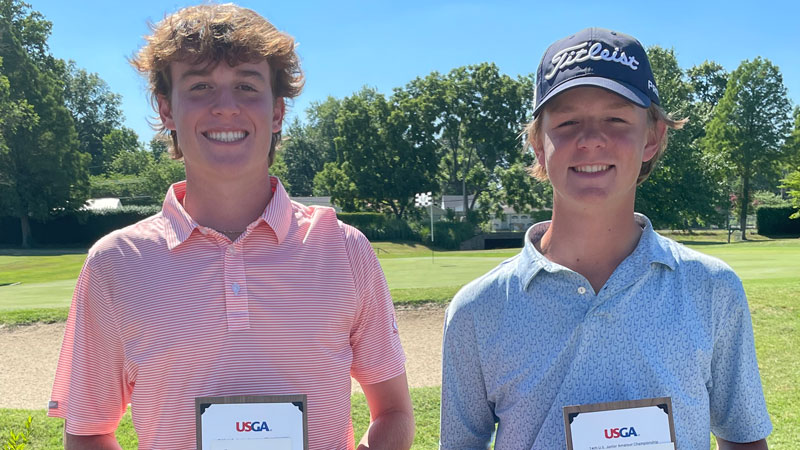 Kentuckians Smith and Finney among the three who qualify for U.S. Junior Amateur.

OWENSBORO, KY (June 27, 2022) - Brady Smith, Jackson Finney and River Stilley can start preparing to compete at one of American golf’s most incredible venues for one of the biggest championships in junior golf worldwide. Today, those three players qualified for the U.S. Junior Amateur at Bandon Dunes in Bandon, Oregon which will take place on July 25-30.

The Country Club of Owensboro hosted Kentucky’s sole qualifier for this championship on Monday where sixty players entered the field hoping to lock down one of those exemptions. Brady Smith of Simpsonville took medalist honors thanks to the low round of the day with 68 (-4). Smith was even-par after his front nine, but four birdies against a bogey-free inward half led to a spirited 32 (-4) that pushed him over the top and into the field in Oregon.

One shot behind him was Louisville’s Jackson Finney who secured the last guaranteed spot that did not end up needing a playoff. Much like Smith, Finney was even at the halfway point, but didn’t have any bogeys down the stretch while three birdies painted his scorecard on holes 10-12. Pars the rest of the way gave the St. Xavier graduate and future Cincinnati Bearcat his spot in the Beaver State.

A playoff was needed to determine the final exempt spot after River Stilley of Benton, Illinois and Richmond’s Warren Thomis tied for third with matching scores of 70 (-2). The subsequent extra golf needed just one hole to decide a winner, as Stilley made a 4 to Thomis’ 5 to wrap up the final guaranteed spot at Bandon Dunes.

Thomis is now the first alternate from this qualifying site while Union’s Christopher Harpum is the second alternate. Harpum finished the qualifier in solo-fifth with a score of 71 (-1) to clinch that position.

Kentucky Junior Golf and the Kentucky Golf Association extend their thanks to Jason Fitch, PGA Head Golf Professional and the entire staff at Country Club of Owensboro for their assistance in hosting this qualifier. Additionally, appreciation is sent towards each player who competed in today’s event.