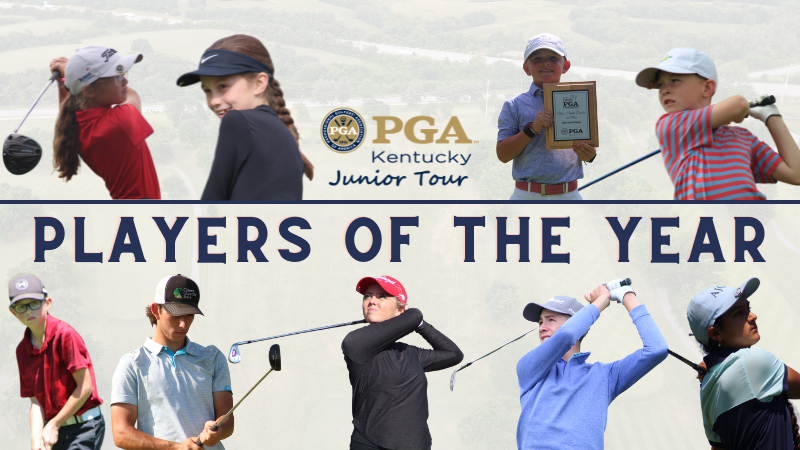 LOUISVILLE, KY (November 3, 2022) – After 35 events on the Kentucky PGA Junior Tour stretching from March through October, nine young Kentuckians have been bestowed with the Tour’s Player of the Year titles. Each of these players accumulated the most points in their respective division to claim these honors, and each of them will receive their choice of a commemorative golf bag or framed flag to celebrate their outstanding seasons. 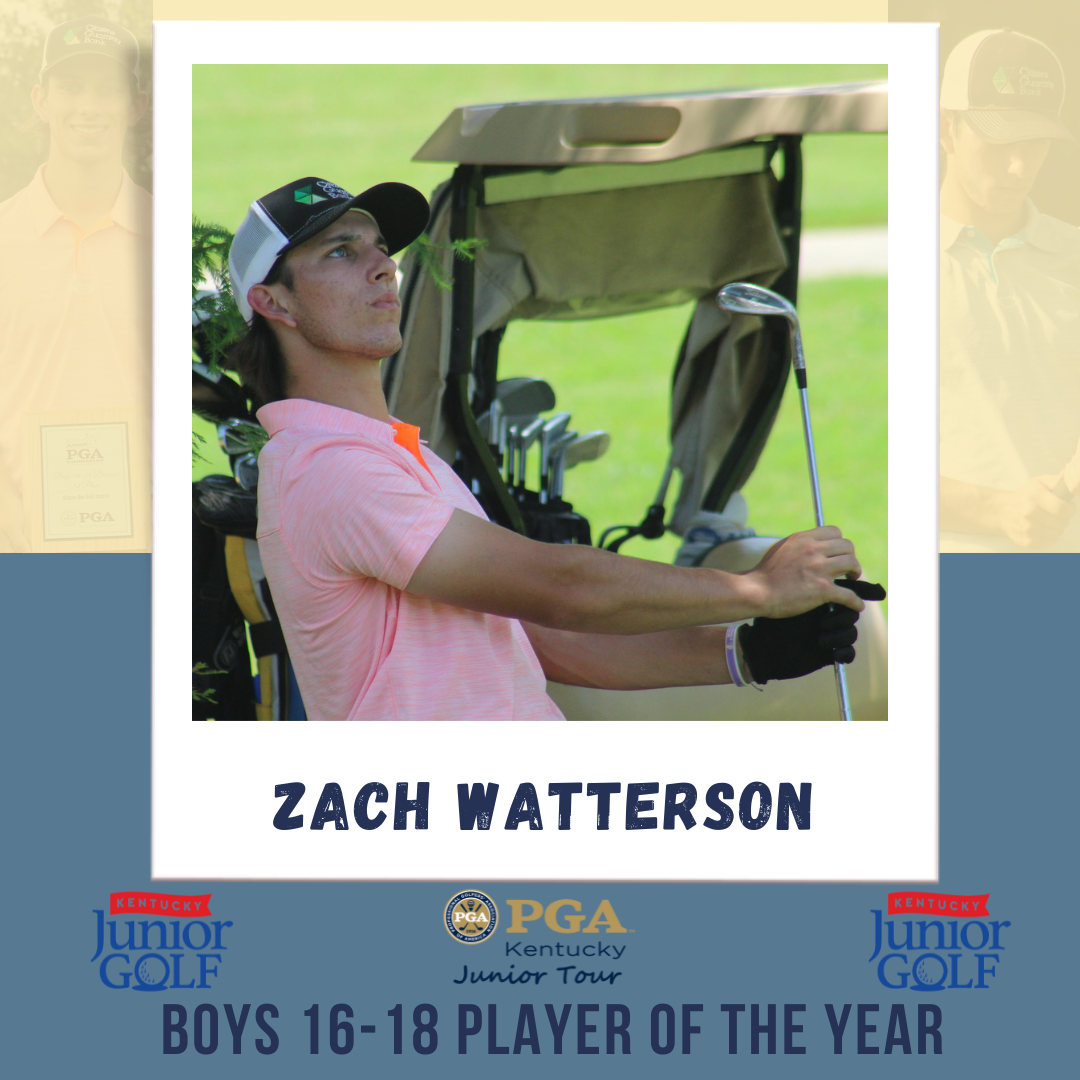 For the second consecutive year, Zach Watterson of Beattyville is the Boys 16-18 Division’s Player of the Year. Entering the season, he stood as one of the top male players to have not won an overall title at one of the Tour’s three major championships, but the narrative is much different now at the end of the season after claiming two of those titles in 2022. His victories at the Kentucky Boys Junior PGA Championship and the Lou Perry Tour Championship helped the senior at Lee County High School earn more than two times the number of points as the runner-up, Luke Coyle. In addition to the major triumphs, Watterson also posted impressive results at the Lexington Junior City Championship with a runner-up mark and a top-five finish in the Kentucky Boys Junior Amateur.

“Winning the Player of the Year title on the Kentucky PGA Junior Tour once again is an honor that I am really proud of,” said Watterson. “It shows that hard work will pay off. The two major wins and getting to play with a bunch of my friends throughout the year will be the things I remember most about this season.” 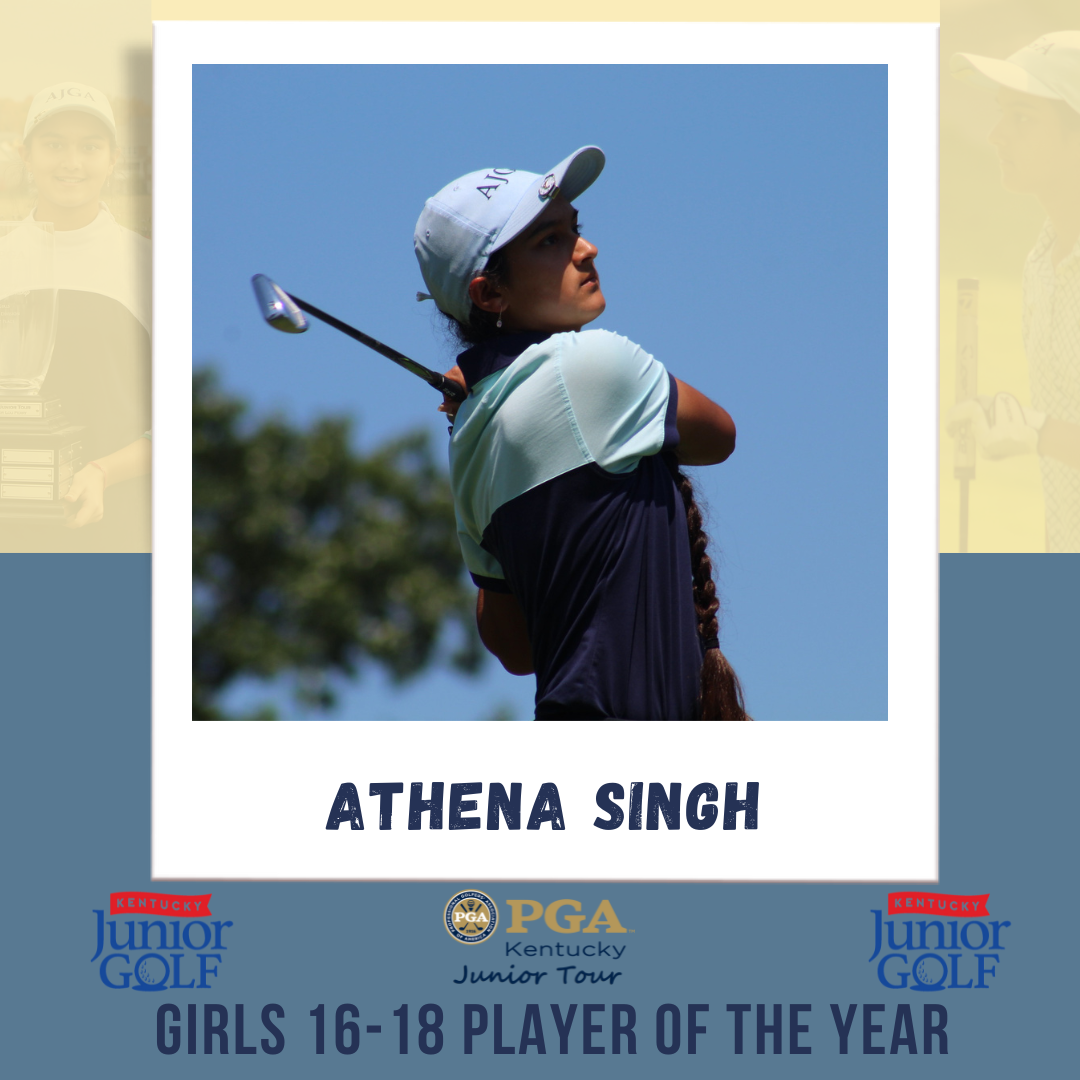 The Girls 16-18 Division was led from start to finish by Athena Singh of Morehead, who had one of the top years in the Tour’s history from the ladies’ premier division. In seven starts, the Lakeside Christian Academy student won six times with major titles at the Kentucky Girls Junior Amateur and the Lou Perry Tour Championship highlighting her performances. Making this campaign even more impressive was the fact she competed against players who are at least three years older than her. At 13 years of age, Singh still has several seasons of junior golf remaining and appears poised to continue adding to her list of accomplishments. 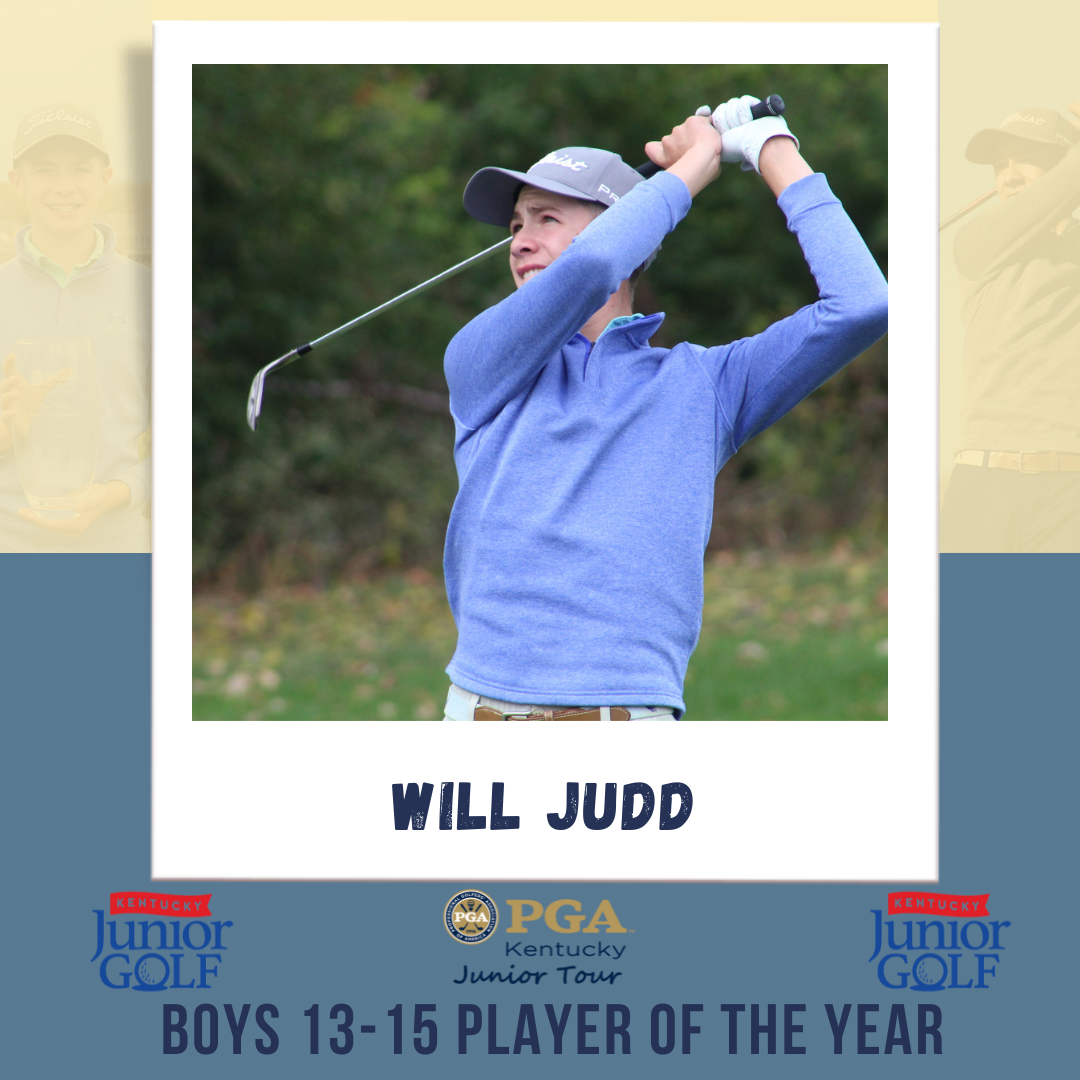 Will Judd of Louisville followed the footsteps of Watterson and Singh to decisively win the Boys 13-15 Division’s Player of the Year. Judd won all three major championships within his division and claimed victories in two of the Tour’s other top events with first place finishes at both the Spring Classic and the Junior Falls Cities. In eleven official tournament rounds throughout the year, Judd broke par in five of them.

“It’s an honor to be Player of the Year and to complete the Grand Slam on the Kentucky PGA Junior Tour,” stated Judd. “At the beginning of the year, those were the goals I had set for myself, so it was fun to see how the practice and dedication I put in paid off. My favorite memory was when I finished with an eagle, hole-in-one, and a birdie at Gibson Bay during the first round of the Kentucky Boys Junior PGA Championship.” 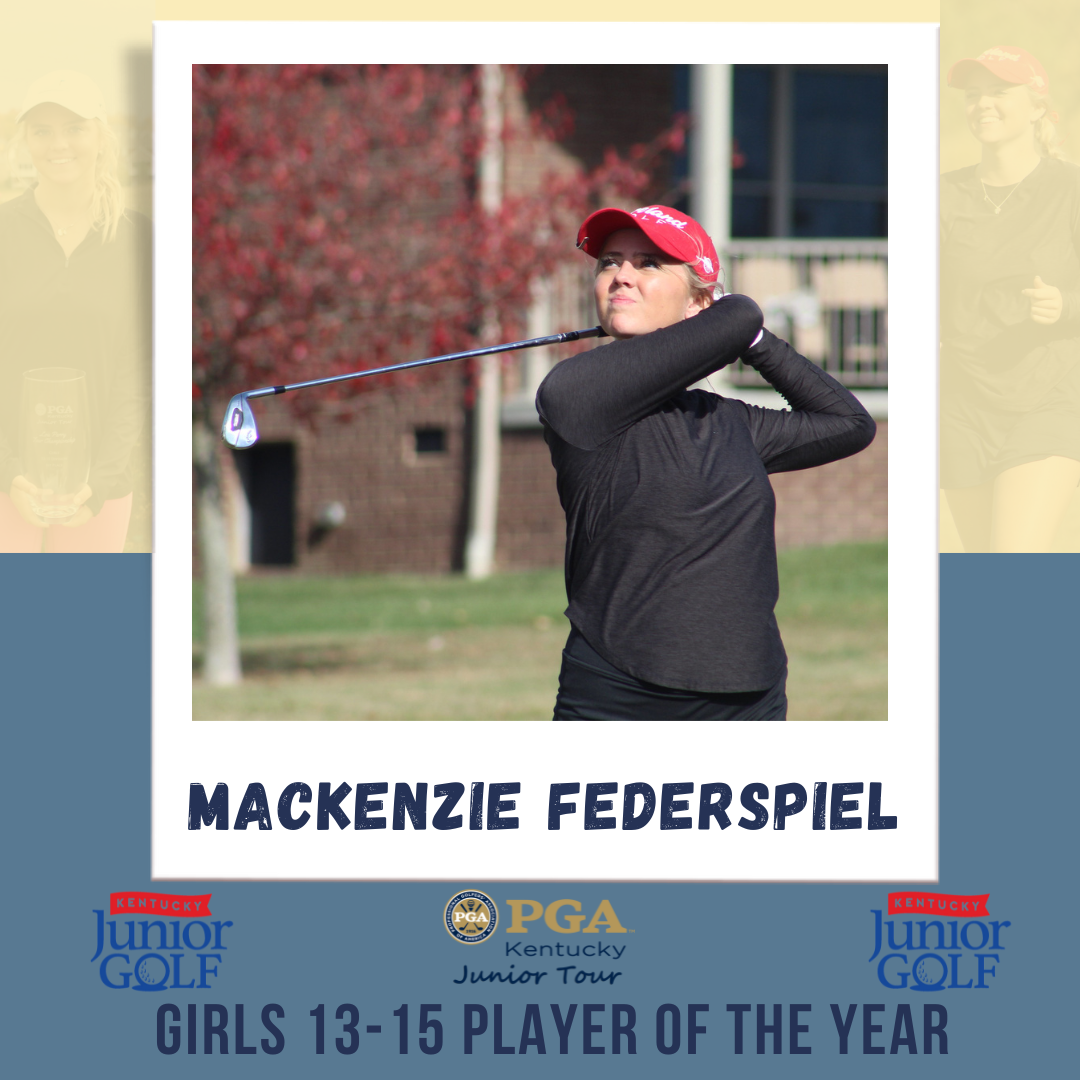 Richmond’s Mackenzie Federspiel captured the Girls 13-15 title after batting 1.000 for the season with five victories in five starts. All of those wins occurred in two-day tournaments, with two major titles included in that run of success. Throughout the year, the improvement in Federspiel’s game was evident based on her scores. After winning in the springtime with rounds in the 80s, her victories late in the summer and in the fall were all with rounds in the 70s, as a 72 (E) from Bardstown Country Club in the first round of the Kentucky Girls Junior Amateur highlighted her list of performances.

“I am proud that all of my hard work and dedication finally started to pay off this year,” explained Federspiel. “I had to save par on the last hole of my round at Bardstown to shoot 72 (E), so I was thrilled to do that and record my career-best score. I’m thankful for the amazing golfers I met on course this summer and look forward to continuing those lasting friendships in future events. I also want to thank my friend Lane Virgin who caddied for me at the Lou Perry Tour Championship after he made me laugh throughout the weekend, plus my family for their support. I am especially thankful for my sister, Haley, who also plays on Tour. It meant a lot to have her cheering me on after she completed her rounds.” 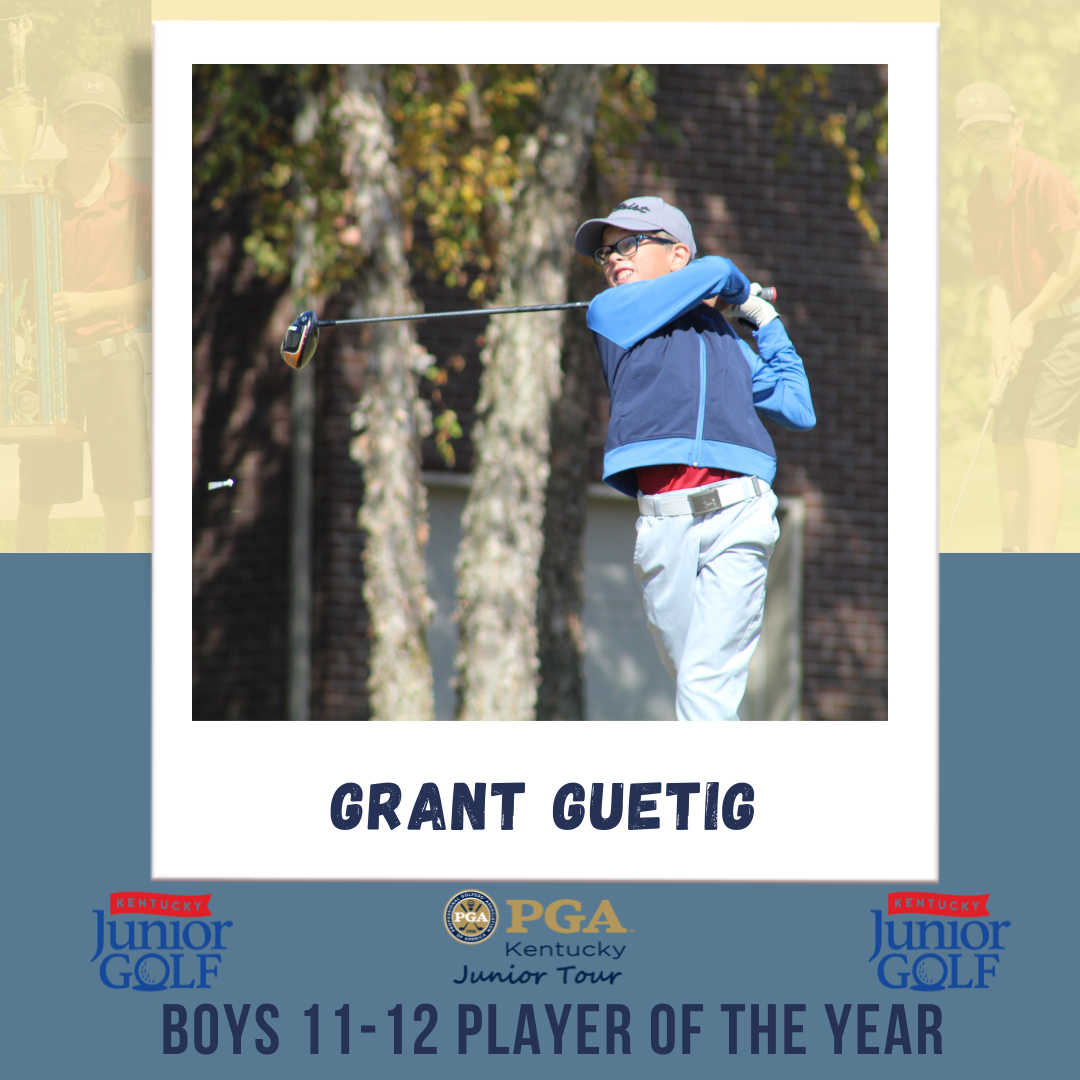 The Boys 11-12 Division was a tightly contested battle among several competitors throughout the season, but Grant Guetig of Louisville topped the standings at year’s end after picking up four victories throughout 2022. Guetig left with first place honors in the Kentucky Boys Junior PGA Championship, Junior Falls Cities, Fall Series Championship, and at the Kentucky Junior Four-Ball Championship alongside Griffin Jackson. Guetig also posted four other top-three finishes, and a runner-up in the Lou Perry Tour Championship was the final push needed to claim the top spot for the season after his rounds of 35 (-1) and 36 (E) at Cherry Blossom Golf Club.

“I appreciate everyone from the Kentucky PGA Junior Tour who works hard to make this the most fun Tour to play,” exclaimed Guetig. “This achievement makes me know there is a reason why I put in a lot of hard work over the year. My favorite memories from this season have been making a birdie putt to win in a playoff at the Junior Falls Cities, advancing to the Drive, Chip & Putt Regional in Ohio, and winning my first major title in Richmond. I’m hoping this year gets me one step closer to my goal of meeting Justin Thomas!” 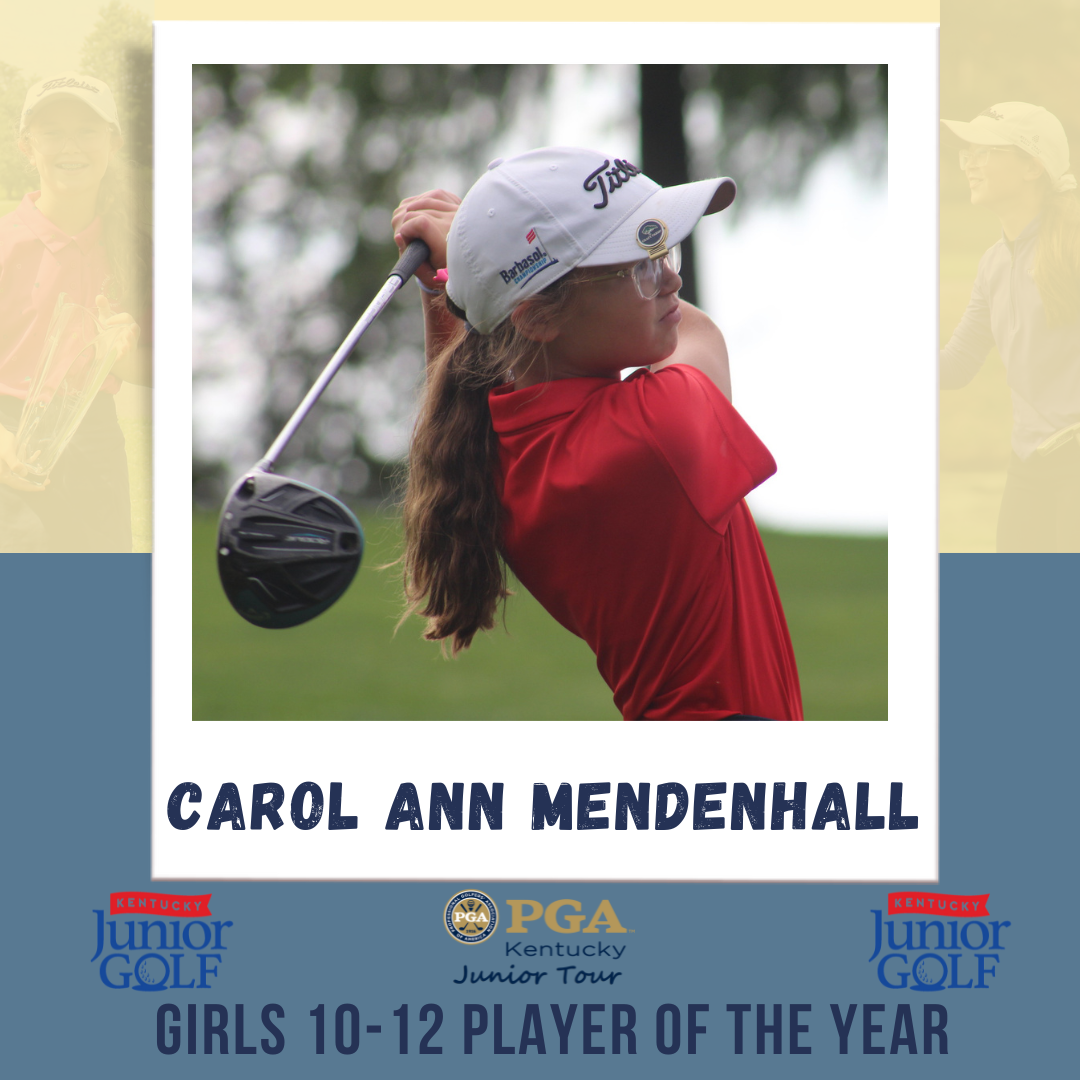 Carol Ann Mendenhall won at a machine-like pace all year, securing the Nicholasville product the Girls 10-12 Player of the Year title. Mendenhall competed in twelve tournaments and won eleven of them, with the three majors included, making her the only female from any division to achieve a Grand Slam this season. She posted under-par or even-par scores in six tournament rounds this year which bodes well her for promising future within the sport at just 11 years of age.

“First, I want to thank the Kentucky PGA Junior Tour and their staff for an amazing year,” summarized Mendenhall. “Second, I want to thank each golf course in Kentucky that hosted tournaments. I also want to give thanks to my coach Larry Ward, my parents and all of my family and friends who support me. It means so much to me to win this award because it shows how much hard work I put in to this year. I loved playing with my friends throughout the year and shooting -4 in my last tournament at the Lou Perry Tour Championship.” 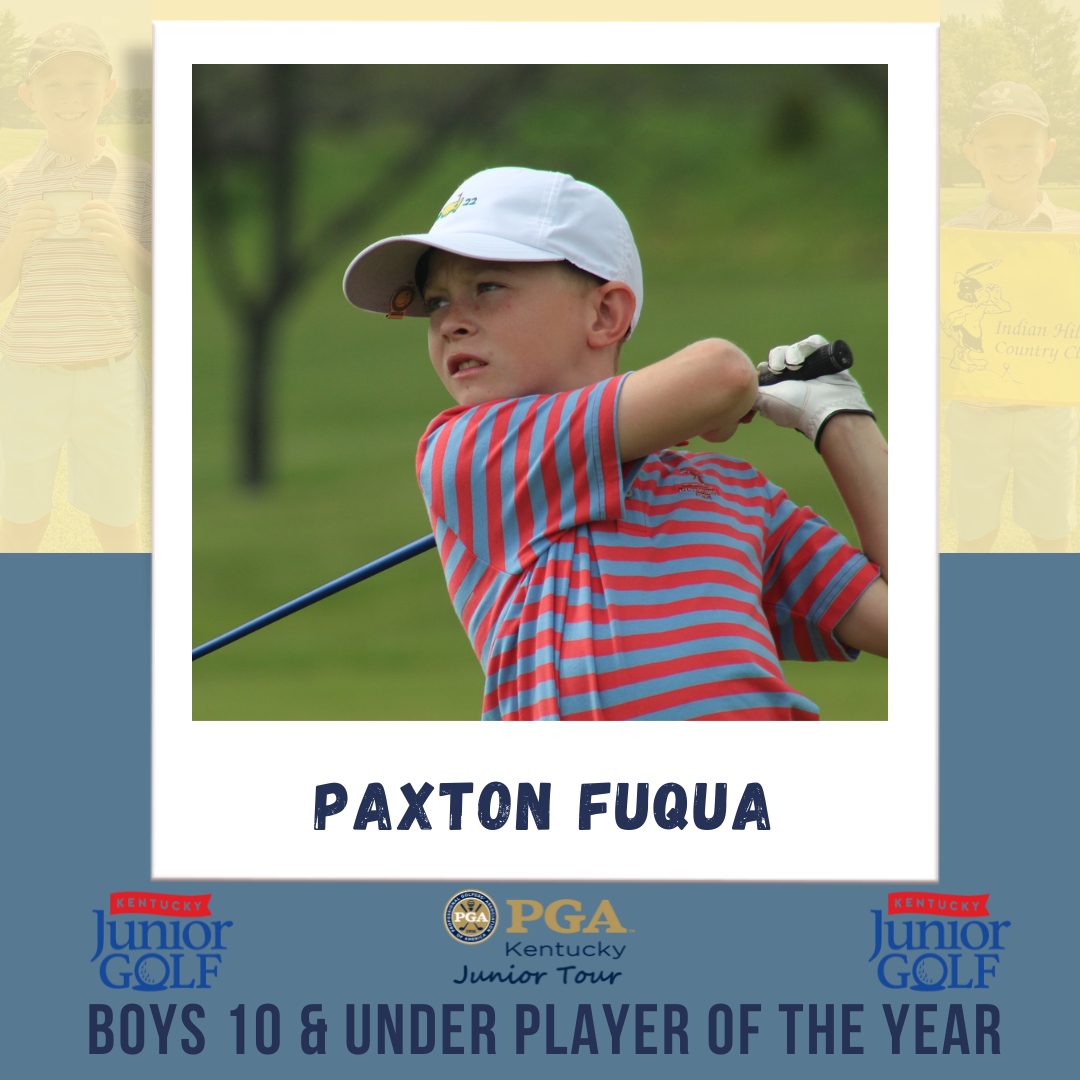 Bowling Green’s Paxton Fuqua claimed the Boys 10 & Under title in a year that featured six wins in eleven starts. Fuqua walked away with first place at the Kentucky Boys Junior PGA Championship, Season Kickoff, Spring Classic, Northern Kentucky Junior PGA Championship, and the Series Tournaments at Indian Hills Country Club and Bowling Green Country Club. He also had three runner-up finishes that allowed him to clip Greyson Cloern by less than 200 points for the season-long title.

“I love playing on the Kentucky PGA Junior Tour and my goal is always to win Player of the Year,” stated Fuqua. “I had some tournaments that were a little shaky, but those only pushed me to do better in future events.” 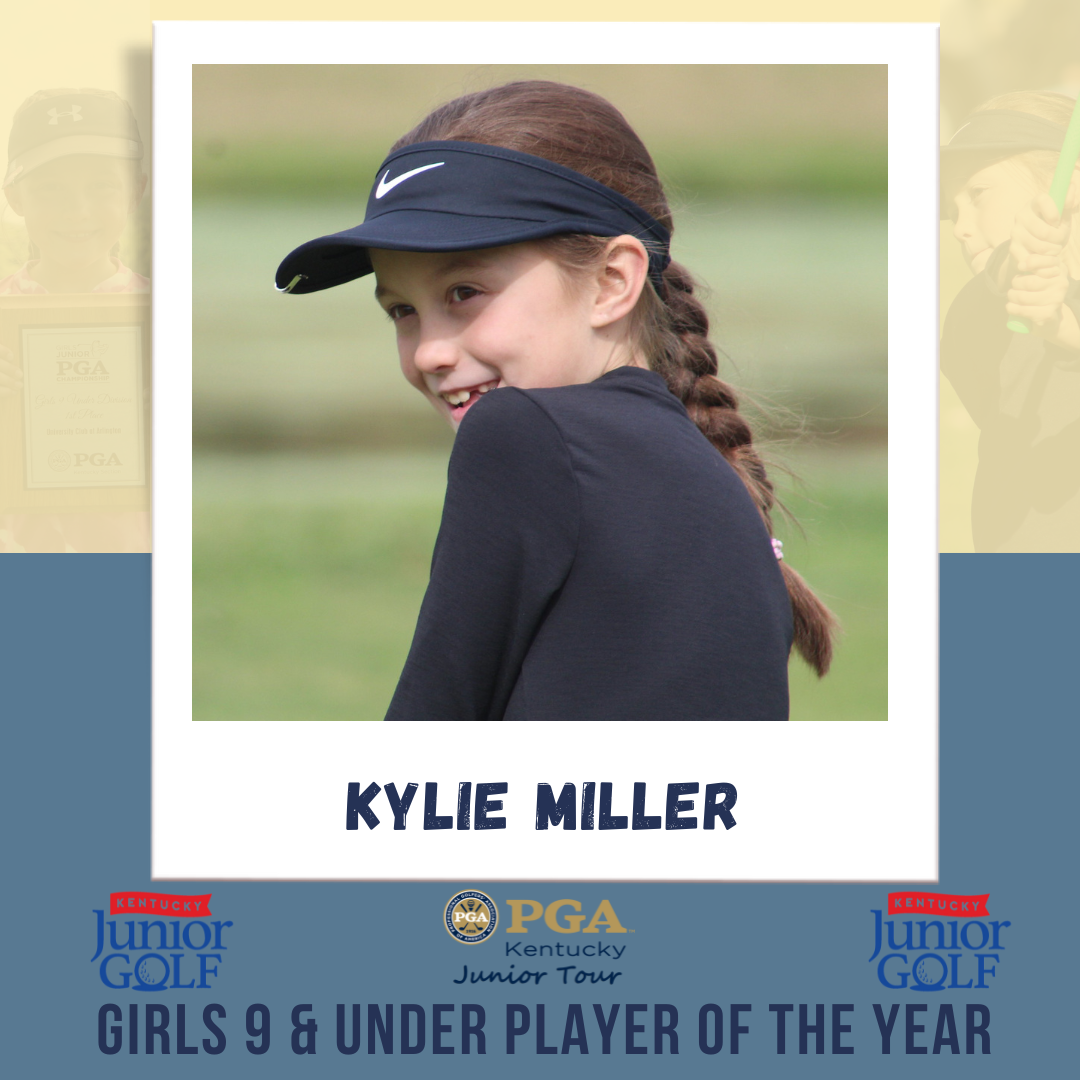 2022 had already been memorable for Mayfield’s Kylie Miller after she qualified for the 2023 Drive, Chip & Putt National Finals in September, but her autumn has gotten even more illustrative after snagging the Girls 9 & Under Player of the Year title. Kylie follows in the footsteps of her sister Emlie who had won this award in 2021 and 2020. Three victories in eight starts on Tour is what propelled Kylie to the top, while runner-up finishes in each of her other starts ensured her Player of the Year triumph.

“I’m super happy to win Player of the Year,” said Miller. “The competition this year was really tough so to come out on top is really exciting. After Emlie beat me for Player of the Year each of the last couple years, it was a big goal of mine at the start of the season to win this award. I’m so glad I was able to pull it off. The biggest excitement I got this year in golf was winning the Drive, Chip & Putt Regional in all three stages to qualify for the opportunity to compete at Augusta next spring. Winning the first two majors of the season was really cool too. This offseason, I’m going to work on getting stronger and improve my chipping and putting.” 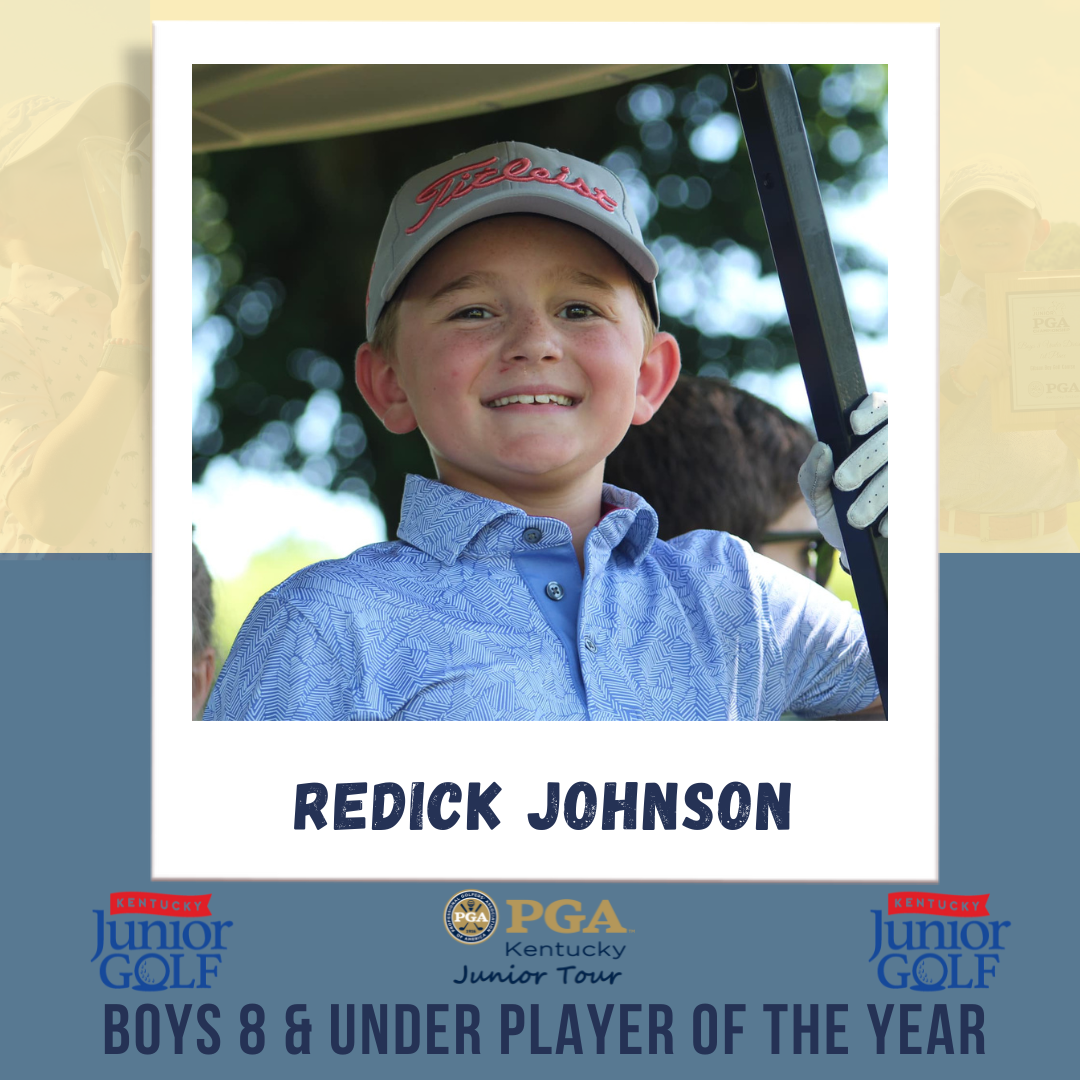 The final Player of the Year is Redick Johnson of Elizabethtown who had a perfect 2022 to capture the Boys 8 & Under title. All nine of Johnson’s starts on Tour led to a win, including each of the three major championships. Johnson had multiple tournament rounds this season which yielded even-par scores or better and closed in style at the final round of the Lou Perry Tour Championship with a round of 35 (-1). Having just turned 9 years of age, Johnson will move up a division in 2023 and seek similar prowess in the Boys 10 & Under Division.

“I have worked really hard this year to achieve this goal," said Johnson. "I write down goals every season and being Player of the Year was one of them for 2022. I’m very thankful for my coach Mike Thomas and my parents who have always believed in me. My favorite tournament this year was the Lou Perry Tour Championship at Cherry Blossom. Closing out the season under par was a huge accomplishment for me and provides great momentum for 2023.”

Click here to view the final standings from each division

The Kentucky PGA Junior Tour offers its congratulations to each of these players and their families on these awards. The Tour also extends its thanks to them and all players who competed throughout the season for their participation and support of the program.

On Friday, the Golf House Kentucky Junior Players of the Year will be announced, recognizing the male and female who had best seasons in top local and regional junior competition, State Opens, State Amateurs, and national championships administered by the PGA of America or USGA.