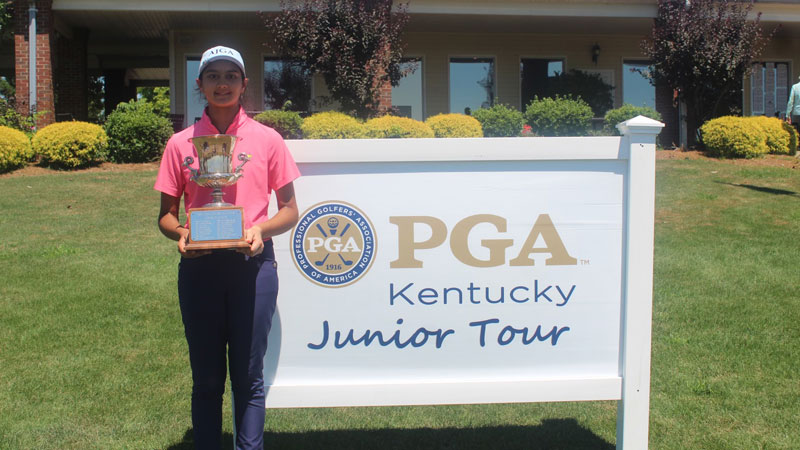 BARDSTOWN, KY (June 29, 2022) – What has already been a career year for Athena Singh had another layer added to it on Wednesday as she became the champion of the Kentucky Girls Junior Amateur at Bardstown Country Club. The 13-year-old from Morehead went wire-to-wire and won by four shots with Madison Borders finishing runner-up.

It did not take long for Singh to pull away from her competitors as three birdies from holes 2-7 established some room for error for the eventual champion. Borders was able to trim Singh’s lead to as little as two strokes midway through the back nine, but a steady closing stretch from Singh was punctuated by a birdie on the final hole. That secured her first overall major championship on the Kentucky PGA Junior Tour and makes it an incredible five wins in six starts for her on Tour this season, going alongside her first career AJGA victory two weeks ago at Bellefonte Country Club.

“I got seventh place at this tournament last year and was determined to do better this time,” Singh said. “Long putting has probably been the biggest key to my play so far this year. It’s become the top strength of my game since it reduces the number of three-putts I have while giving me some birdies that I maybe wouldn’t expect to make.”

Several other players were victorious on Wednesday including Mackenzie Federspiel, who dominated the Girls 13-15 Division to the tune of an eleven-shot win. She posted a total score of 148 (+4) which gets her a fourth victory in as many starts on Tour so far this season.

The tightly contested Boys 11-12 Division went the way of Mount Vernon’s Conner Ford, who pulled away for a three-stroke victory thanks to his second straight round in red numbers. He went one stroke lower on Wednesday with 33 (-3) to accumulate a total score of 67 (-5).

Carol Ann Mendenhall is now two-for-two in the majors this year with her latest victory in the Girls 10-12 Division. Mendenhall’s tournament score was 72 (E) which provided a two-stroke margin of victory over Caroline Lankford.

Greyson Cloern shot his second straight round of 33 (-3) which allowed him to coast to an eight-shot victory in the Boys 10 & Under Division. After making bogey on his first hole of the tournament, Cloern was bogey-free the rest of the way with seven birdies going alongside ten pars.

Kylie Miller joins Mendenhall as players to have won both of their major titles so far this year, as she won the Girls 9 & Under Division by four strokes. Miller improved from 43 (+7) in the first round to a closing 41 (+5).

The final champion crowned on Wednesday was Redick Johnson, another player who is perfect in this year’s majors so far. He won the Boys 8 & Under Division by four strokes over Harrison Carlton. Johnson, Mendenhall and Miller will all have the chance to win “grand slams” in the Tour’s majors this year at Cherry Blossom Golf Club during the Lou Perry Tour Championship on October 15-16.

The Kentucky PGA Junior Tour extends its thanks to Chris Osborne, PGA General Manager and the entire staff at Bardstown Country Club for their assistance in hosting this event. Additionally, the Tour sends its appreciation towards each player and their families who took part in the Tour’s second major of the season.

The Tour will be back in action on Thursday with Series Tournament #10 at Winchester Country Club before a small break on the calendar during Independence Day weekend. The second of the Tour’s Junior Amateurs will take place on July 11-12 at University of Louisville Golf Club where 18-hole boys will compete in the next major on the Tour’s schedule.