Athena Singh Leads by One at Kentucky Girls Junior Amateur 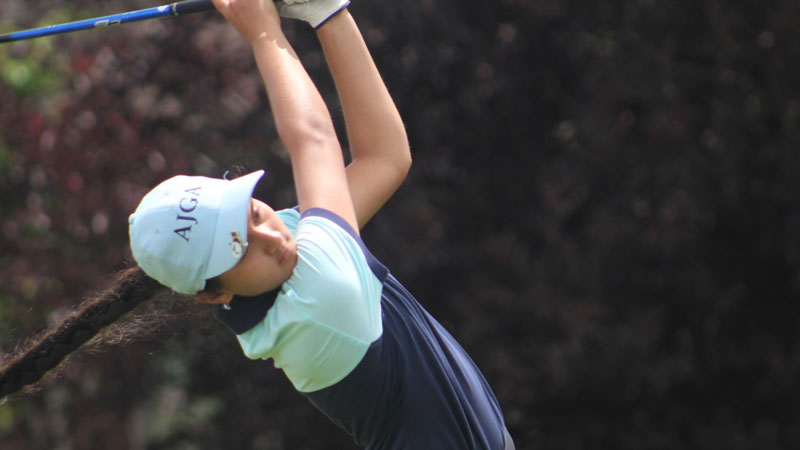 BARDSTOWN, KY (June 28, 2022) – Athena Singh has had her foot on the accelerator all year so far on the golf course, and the opening round of the Kentucky Girls Junior Amateur offered more of the same.

Singh has the overnight lead at Bardstown Country Club following a round of 70 (-2), giving her a one-shot lead at the halfway point of the Kentucky PGA Junior Tour’s second major of 2022. After going out in 37 (+1), an eagle on the par-five 10th swung Singh into red numbers. She added cushion to her under-par status with a birdie on the closing hole with a stretch of seven pars sandwiched in between.

Two players are directly behind her with Mary Keene Marrs and Cailyn Rogers closely lurking after matching rounds of 71 (-1). Marrs, a recent high school graduate heading to Eastern Kentucky University this fall, had three birdies highlight her round. Rogers, who was the medalist of Kentucky’s U.S. Girls Junior Qualifier one month ago, upped the birdie count to four, which was the most birdies made from any player in the Girls 16-18 Division on the opening day.

Singh, Marrs and Rogers will headline the Wednesday tee sheet with their 9:50 a.m. EDT rounding out the Girls 16-18 Division in pursuit of the coveted title.

There are six other divisions competing at Bardstown, including the Girls 13-15 Division. Mackenzie Federspiel is off to a hot start in this competition as an opening round of 72 (E) gives her a six-stroke cushion heading into the final round.

The Boys 11-12 Division is met with some fantastic competition at the top as Conner Ford and Griffin Jackson set the pace with rounds of 34 (-2). Ford had four birdies on Tuesday while Jackson put on a bogey-free performance. Luke Ebel follows them by a stroke while Hunter Majors is lurking at two shots behind.

Carol Ann Mendenhall is under-par as well and her 35 (-1) on Tuesday gives her a three-shot edge on Caroline Lankford. Mendenhall carded an impressive three birdies in her round to generate the early advantage.

Greyson Cloern put on a terrific showing to take a commanding lead in the Boys 10 & Under Division. Cloern made four birdies during his last eight holes to shoot 33 (-3) and go five shots clear of Paxton Fuqua, Max DeHaven, and Matthew Britt.

Kylie Miller and Molly Amos are locked in a tight battle for the right to be Girls 9 & Under champion. Miller is one clear of Amos but the pair has distanced themselves from the pack, with six shots separating Amos from third place.

Redick Johnson is off to the strong start that’s come to be expected from the star youngster this season. He leads the Boys 8 & Under Division by three shots over Harrison Carlton going into Wednesday.